Sierra Madre Gold and Silver (SM:TSX.V) is a five-week-old public company-it began trading on the TSX Venture Exchange on April 19-developing the silver-rich Tepic Project located in the mining-friendly state of Nayarit, Mexico.

Streetwise Reports spoke with the President and CEO of Sierra Madre, Alex Langer, who started his career at Canaccord Genuity where he helped fund over 100 private and publicly listed companies including IPOs for Endeavour Silver, Fortuna Silver and Great Panther.

“During my time at Canaccord, we were focused on junior companies, including a list of silver companies in Mexico,” stated Langer. “I got comfortable with Mexico as a mining jurisdiction.”

“There’s a lot of production in the Nayarit area, but it’s on a small scale. Small mines, small processing facilities,” added Langer. “Part of our plan is to consolidate the area in and around Nayarit.”

“We inherited 31,000 meters of drilling data,” explained Langer. “There is a historical resource of just over 10 million ounces of silver, which is an excellent start for us.”

Langer’s geological team is lead by Gregory Liller (B.SC), who has been operating in Mexico since 1993, playing a key role in the discovery and development of more than 11 million ounces of gold and 600 million ounces of silver.

“Making one metal discovery could be good luck,” commented Langer. “Making six or seven is not.” 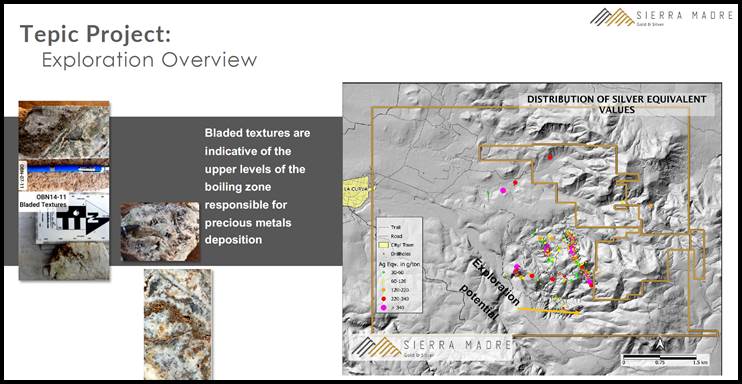 “I’ve a list of things I look at when I am acquiring a project,” stated Liller. “One of them is the infrastructure. I’ve done projects in the middle of nowhere. It’s a different set of economics to make something work if you have to travel 12 hours on dirt roads just to get to the project.”

“The national electric grid is throughout the area. And we have a load out siding on the main Pacific Coast rail line, about 3.5 kilometers from our project. The historical resource totals about 10 million ounces.

“Before we acquired the Tepic project, I looked very closely at the maps, the data and the metallurgy,” stated Liller. “I could see that there was room for improvement in the structural model used in the historical resource estimates. I also found that the historical drilling programs had low recoveries and perhaps had underestimated the actual in-situ grades.”

“I have a very disciplined, traditional approach to exploration,” explained Liller. “This is the way I was mentored. I prefer to be methodical. You map, sample, trench and drill. It’s one of the reasons my hit ratios are higher than a lot of folks. If you just start drilling on a hunch, you can waste a lot of shareholders’ money.”

Not used to hearing geos fret about exploration budgets, we circled back to the SM Management Link, and realized that Liller is also the chief operations officer (COO) of Sierra Madre, responsible for managing day-to-day operations.

Typically, the integration of financial and geological teams is beneficial to medium- and long-term shareholders.

On May 3, 2021, Sierra Madre provided an update on the field activities at the Tepic Silver Gold project.

Work for the last six months has focused on geologic mapping and reconnaissance sampling with approximately 50% of the project covered at a 1:5000 scale level of detail or better.

This has resulted in the recognition of more than 10 kilometers of hydrothermally altered and mineralized structures compared to the 3.5 kilometers known at the time the company optioned the project. 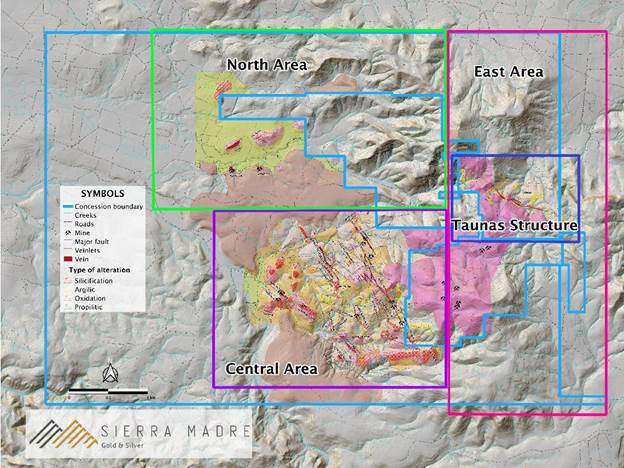 The major findings of this program thus far are:

The company plans on continuing this reconnaissance mapping and sampling until the entire concession holding has been mapped. Based on the above, the company has initiated a 2,700-meter trenching program.

When the company optioned the Tepic project, the previous owner’s efforts had centered on the Dos Hornos – Veta Thomas and Once Bocas areas. The following map shows the known mineralized structures at the time of acquisition. 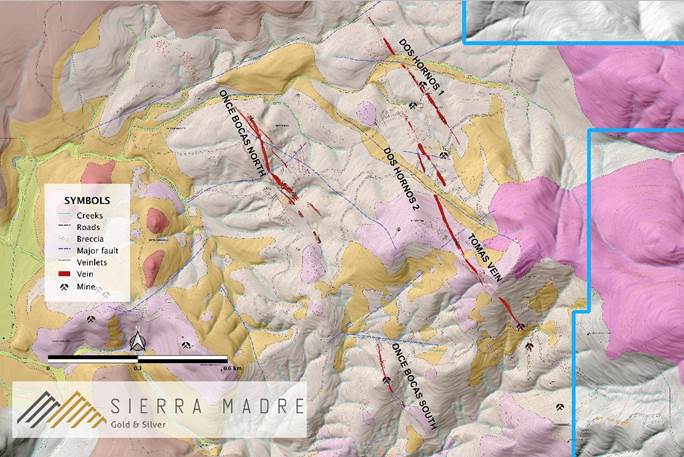 Mapping and field work by the company’s geologists has found the structural fabric of the area to be much more complex than previously portrayed. Numerous mineralized cross faults and several more northwest trending principal structures have been located. 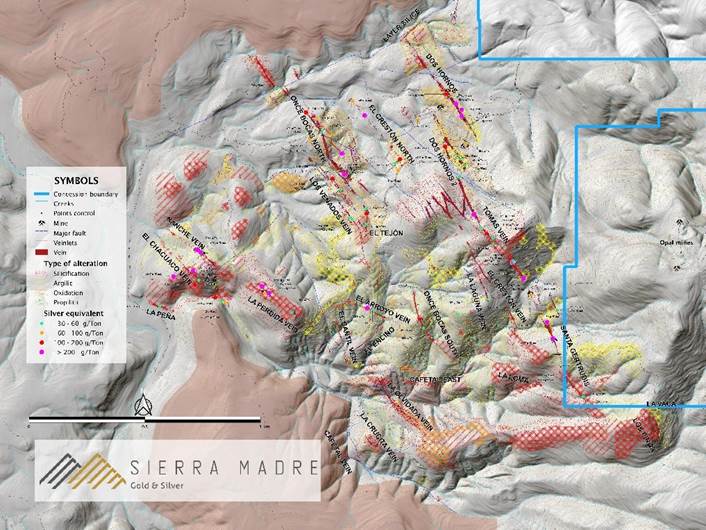 Highlights of reconnaissance sampling include 788 g/t silver equivalent (Ag eq) on the Nanche vein, and 798 g/t Ag eq on the Veta Tomas structure (silver equivalent values calculated using a 70:1 silver to gold ratio reflective of precious metal prices of $25/ounce for silver and $1,750 for gold).

A 2,700-meter trenching program is being planned to establish the width and potential of the newly identified structures.

On May 11, 2021, Sierra Madre announced that drilling has begun at the Tepic Silver Gold project.

The phase 1 drilling program is scheduled for 21 holes. The company is currently permitted for a total of 67 drill holes.

Reverse circulation drilling methods are being employed as the previous operator experienced poor core recovery, especially within the mineralized zones of interest. Samples will be collected at 5-foot intervals for the entire hole.

The contractor will use face sampling air hammers throughout the drill hole. The air pressure caused by the reverse circulation hammer bit face and center passage tube create a vacuuming effect, forcing sample cuttings into the center passage of the dual walled pipe.

This method of drilling can achieve near 100% sample recovery with very little risk of contamination, according to the company.

The targets for this drilling are mineralized structures located in the Central Area of the Tepic project. 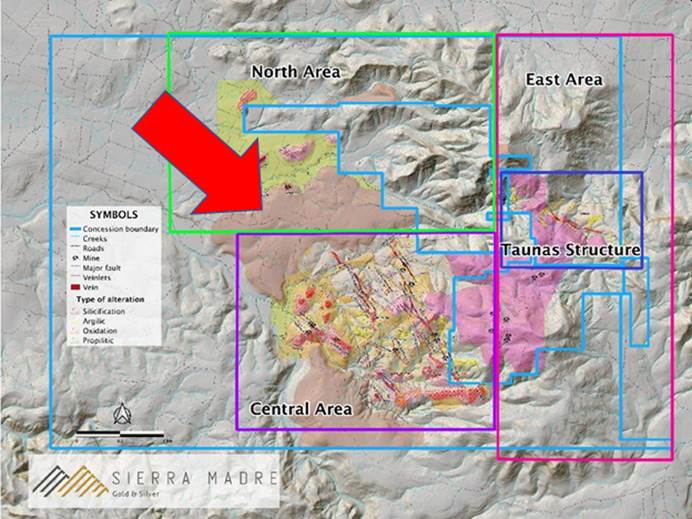 A year ago, silver couldn’t get a date on tinder.

Now it is an object of mass desire. 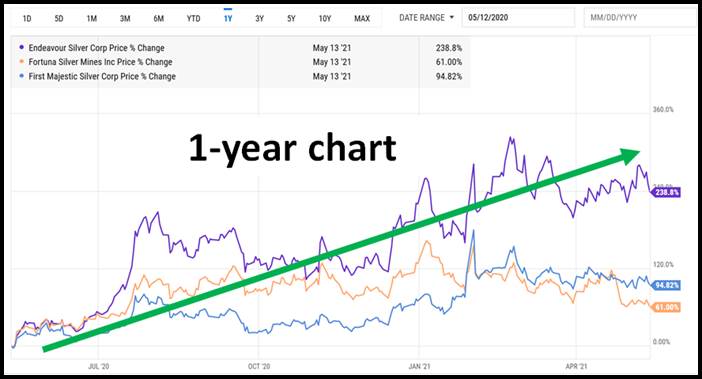 Silver is currently trading at around $28/ounce, up more than 65% in the last 12 months on safe-haven and industrial demand, and “green energy” stimulus.

Silver is used as conductive layer in solar panels.

“Silver’s potential exposure to green stimulus is now an important tool in its armory,” continued BMO.

The automotive industry will use approximately 61 million ounces of silver in 2021, according to a report published by The Silver Institute.

As for Sierra Madre, “Greg Liller, myself and other founders own about 40% of all Sierra Madre shares,” explained Langer, “We’ve been adding to our positions through purchases in the open market. There are currently 64 million shares outstanding.”

“The 2 million broker warrants will be crossed out relatively soon. So fully diluted, Sierra Madre has 66 million shares outstanding. There’s really no overhang on the stock.”

“We currently have $14.6 million in in the bank-and we’re now spending that on drilling our first Mexican silver property.”

“Look for us to add other high interest projects in the short term,” added Langer.

2) The following companies mentioned in this interview are billboard sponsors of Streetwise Reports: Sierra Madre Gold and Silver. Click here for important disclosures about sponsor fees. The information provided above is for informational purposes only and is not a recommendation to buy or sell any security.

4) From time to time, Streetwise Reports LLC and its directors, officers, employees or members of their families, as well as persons interviewed for articles and interviews on the site, may have a long or short position in securities mentioned. Directors, officers, employees or members of their immediate families are prohibited from making purchases and/or sales of those securities in the open market or otherwise from the time of the decision to publish an article until three business days after the publication of the article. The foregoing prohibition does not apply to articles that in substance only restate previously published company releases. As of the date of this article, officers and/or employees of Streetwise Reports LLC (including members of their household) own securities of Sierra Madre Gold and Silver and Fortuna Silver, companies mentioned in this article.

January 21, 2022 (Investorideas.com Newswire) Electrification and decarbonization are anticipated to be one of the ...
By
17 mins ago

January 21, 2022 (Investorideas.com Newswire) The common shares of Kings Entertainment Group Inc. have been ...
By
17 mins ago

Gold Is the Belle of the Ball. Will Its Dance Turn Bearish?

January 21, 2022 (Investorideas.com Newswire) The precious metals still do pirouettes on the trading floor, ...
By
1 hour ago

Bringing Metaverse to Life: UMetaWorld Debuts With Plans to Replicate the Metaverse World

Crude Oil: A Surprising Increase in US Inventories

Gold Is the Belle of the Ball. Will Its Dance Turn Bearish?