July 6, 2021 (Investorideas.com Newswire) McAlinden Research Partners concludes that the investment in charging station infrastructure must rise in order to meet the push from automakers and governments for increasing electric mobility.

As climate change initiatives become more popular and automakers continue to boost electric vehicle (EV) production, it has become increasingly clear that there will need to be a sizable buildout of charging infrastructure to match. Without significant and sustained charging station investment, the speed of EV adoption in the US could be diminished by consumer hesitation to commit to vehicles with relatively sparse charging destinations. While the rise of the SPAC era has helped supercharge the valuations of many startups, more public sector expenditure will likely be needed to guarantee a truly ubiquitous EV charging network.

The Biden administration has proposed spending $15 billion on 500,000 charging stations by 2030, but a recent GovTech report writes that investment will need to rise to $87 billion if the US aims to have 100% EVs by 2035.

With increasing frequency, major automakers continue making new pledges to raise their electric vehicle production. General Motors recently revealed it will be increasing its spending on EV development to $35 billion by 2025. That figure, which includes spending on autonomous vehicles, is a 30% increase from the companyaEUR(TM)s previous spending plans announced late last year, per CNBC. The company plans to sell more than 1 million EVs each year by 2025.

Further, Ford announced last month it projects to spend $30 billion on EV development by 2030, a significant increase from their previous target of $22 billion, according to Reuters. The company is striving for 40% of its global vehicle fleet to be electric, which translates to 1.5 million electric vehicle sales in 2030.

A report from Ernst & Young LLP, highlighted by Bloomberg, states that EV sales in Europe, China and the US will outperform gas-powered vehicle sales in 2033 for the first time ever aEUR” five years earlier than previously projected. The report cites strict government mandates regarding climate change, as well as financial penalties for automakers selling gas-powered cars as reasons for the updated forecast. One of the largest contributors, however, is the United StatesaEUR(TM) ambitious goals for EV adoption.

Autonews writes that President BidenaEUR(TM)s proposed infrastructure bill sets aside $174 billion for the advancement of EVs, with 10% of that figure dedicated to developing nationwide vehicle charging infrastructure. If automakers and governments continue pushing toward an embrace of EVs, investments in the buildout of charging stations must also advance to meet the surging level of demand for electric mobility.

As it stands, charging infrastructure currently lacks the level of development needed to handle the forecasted amount of EVs on the road over the next decade and a half.

One of the primary concerns for consumers looking to switch to an electric vehicle is lack of available charging options. In Salt Lake City, for example, Deseret News writes that the number of EV charges at the cityaEUR(TM)s 36 publicly available charging stations had quadrupled from 2017-2019, and that figure is forecast to grow. Similarly in the Bronx, which has a population of over 1.4 million citizens, there are only 17 public EV charging stations, not nearly enough if the country strives to meet its ambitious EV goals, per GreenBiz.

Further, Vox recently highlighted an October 2020 survey from YouGov, which found that charging time, hassle of charging and at home charging costs were the top reasons why prospective car buyers would not consider an electric vehicle.

For mass adoption of EVs, infrastructure must come first. While early adopting environmentalistsaEUR(TM) ethos will make them willing to deal with the lack and inefficiency of current charging stations, the mass market is not so forgiving.

A report from Atlas Public Policy, featured in a GovTech article, concluded that the US needs $87 billion in additional investment in the EV charging infrastructure over the next 10 years in order to put the country on a path toward 100% EV sales by 2035. The report notes that $39 billion would be put toward at home charging, $39 billion for public charging stations and $9 billion for light duty fleet vehicle charging.

As MRP has previously mentioned, the infrastructure bill proposed by President Biden has allocated less than $20 billion for charging infrastructure needs. Installing 500,000 new charging stations across the country would cover 57% of the charging that US vehicles will need by 2030, sparking the sale of some 25 million electric cars and trucks, according to Bloomberg New Energy Finance, but weaEUR(TM)d still lag some of our global competitors.

California has proposed plans to eliminate all new sales of gas-powered vehicles by 2035. To fulfill that goal, it will need 1.2 million charging stations in order to support the number of EVs on the road by 2030. However, according to a report from the California Energy Commission, the state only has 73,000 EV chargers at present.

Fortunately, investment is expected to surge. The global electric vehicle charging market is projected to surpass $61 billion by 2027, a CAGR of 27%. Additionally, EV charging companies have begun teaming up with automakers to make the transition more seamless for both parties. ChargePoint, one of the biggest EV charging companies in the world, announced a partnership with Mercedes Benz to provide 120,000 public and semi-public charging stations across North America for members with a aEUR~Mercedes me ChargeaEUR(TM) account.

GM has also announced partnerships with charging station providers, including ChargePoint, Blink Charging and EVgo, which are forecast to provide 2,500 fast-chargers in cities and suburbs across the US by 2025, highlighted by InvestoraEUR(TM)s Business Daily.

Automakers arenaEUR(TM)t the only companies that are capitalizing on the shift toward electric vehicles. According to MarketWatch, BP has recently invested $7 million into a smart electric vehicle charging firm called IoTecha. BP aims to provide 70,000 chargers worldwide by 2030. Similarly, TechCrunch reports that 7-Eleven is seeking to benefit from the EV trend by installing 500 chargers across North America by 2022.

Last month, Bloomberg noted that AustraliaaEUR(TM)s Tritium, which specializes in fast charging tech and has supplied networks being rolled out by Volkswagen AG and Ford Motor Co., reached an agreement to go public through a SPAC deal with blank-check company Decarbonization Plus Acquisition Corp. II. At TritiumaEUR(TM)s valuation of $1.2 billion, the transaction is expected to generate proceeds of about $403 million.

Charging company Wallbox is also set to go public following a SPAC merger with Kensington Capital Acquisition II. Per BarronaEUR(TM)s, Wallbox has sold more than 100,000 chargers in 67 countries and the deal will value the combined entity at a market capitalization of about $1.8 billion, including $330 million in cash coming into the company via the SPAC deal. 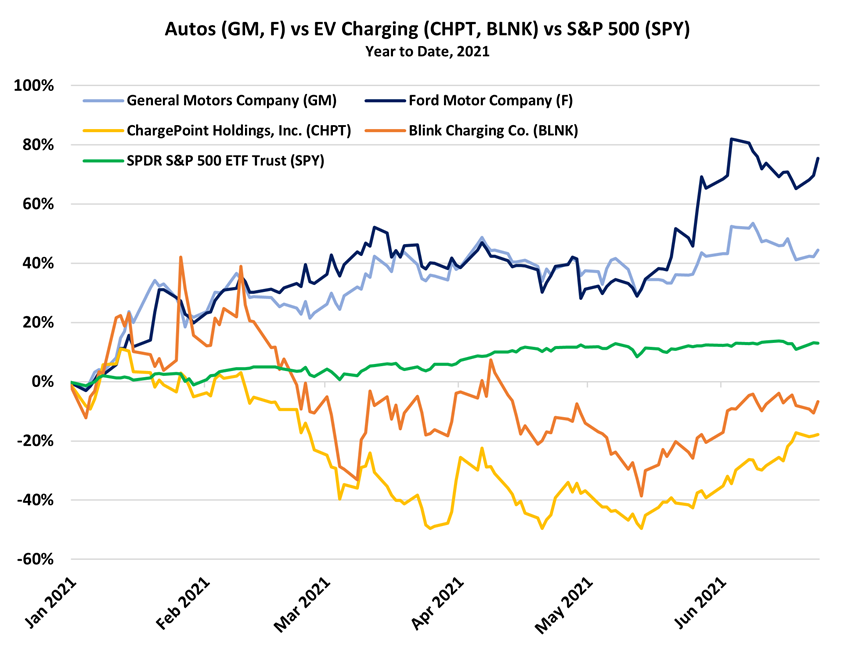 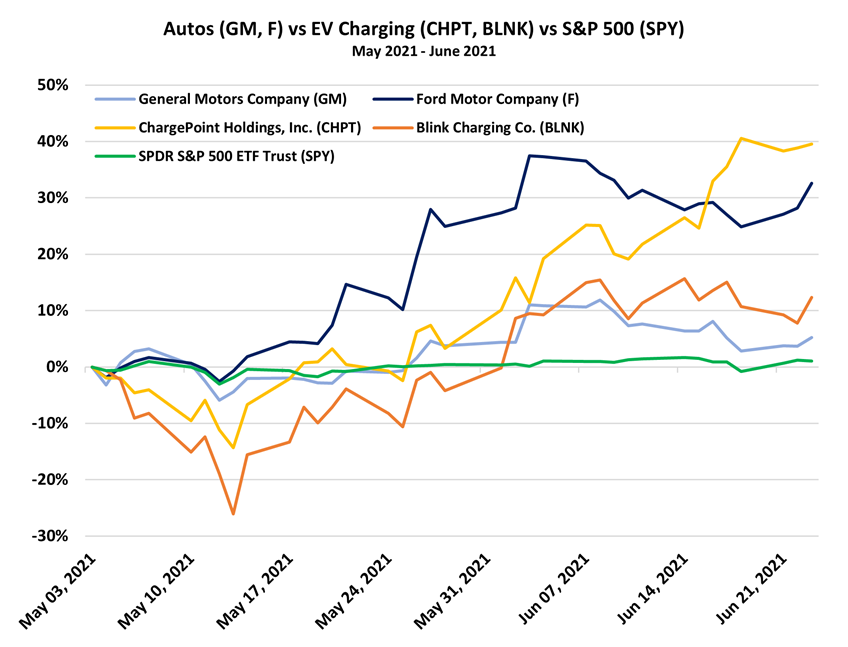 McAlinden Research Partners (MRP) provides independent investment strategy research to investors worldwide. The firm’s mission is to identify alpha-generating investment themes early in their unfolding and bring them to its clients’ attention. MRP’s research process reflects founder Joe McAlinden’s 50 years of experience on Wall Street. The methodologies he developed as chief investment officer of Morgan Stanley Investment Management, where he oversaw more than $400 billion in assets, provide the foundation for the strategy research MRP now brings to hedge funds, pension funds, sovereign wealth funds and other asset managers around the globe.

1) McAlinden Research Partners disclosures are below.

2) The following companies mentioned in this article are billboard sponsors of Streetwise Reports: None. Click here for important disclosures about sponsor fees. The information provided above is for informational purposes only and is not a recommendation to buy or sell any security.

5) From time to time, Streetwise Reports LLC and its directors, officers, employees or members of their families, as well as persons interviewed for articles and interviews on the site, may have a long or short position in securities mentioned. Directors, officers, employees or members of their immediate families are prohibited from making purchases and/or sales of those securities in the open market or otherwise from the time of the decision to publish an article until three business days after the publication of the article. The foregoing prohibition does not apply to articles that in substance only restate previously published company releases. As of the date of this article, officers and/or employees of Streetwise Reports LLC (including members of their household) own securities of Ford Motor Company, a company mentioned in this article.

This report has been prepared solely for informational purposes and is not an offer to buy/sell/endorse or a solicitation of an offer to buy/sell/endorse Interests or any other security or instrument or to participate in any trading or investment strategy. No representation or warranty (express or implied) is made or can be given with respect to the sequence, accuracy, completeness, or timeliness of the information in this Report. Unless otherwise noted, all information is sourced from public data.

McAlinden Research Partners is a division of Catalpa Capital Advisors, LLC (CCA), a Registered Investment Advisor. References to specific securities, asset classes and financial markets discussed herein are for illustrative purposes only and should not be interpreted as recommendations to purchase or sell such securities. CCA, MRP, employees and direct affiliates of the firm may or may not own any of the securities mentioned in the report at the time of publication.

November 26, 2021 (Investorideas.com Newswire) It appears that the US markets didn’t find the Thanksgiving ...
By
2 days ago

November 26, 2021 (Investorideas.com Newswire) The new Covid-19 variant will temporarily wobble financial markets, but ...
By
2 days ago

For US to stand a chance in the global battery arms race, developing a graphite supply is a must

November 24, 2021 (Investorideas.com Newswire) In response to the South Dakota Supreme Court ruling against ...
By
4 days ago

Deja Vu in the World of Junior Mining

November 24, 2021 (Investorideas.com Newswire) Precious metals expert Michael Ballanger takes a look at the ...
By
4 days ago

Large Royalty Company Shifts Talk on Diversification as It Grows